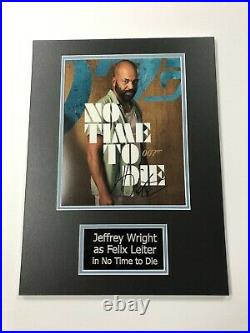 About the Item On offer here is a photo signed by Jeffrey Wright. The photo size is 10×8 inches, in portrait orientation. It was signed during the week of the 25th movie in the James Bond Series, No Time to Die, in London, UK. It is accompanied by our company Certificate of Authentication (COA). It has been double mounted professionally into a 16×12 inch display with an engraved plaque. Jeffrey Wright (born December 7, 1965) is an American actor. He is well known for his Tony, Golden Globe, and Emmy winning role as Belize in the Broadway production Angels in America and its acclaimed HBO miniseries adaptation. Wright starred as Jean-Michel Basquiat in Basquiat, Felix Leiter in the James Bond films Casino Royale, Quantum of Solace and No Time to Die, Valentin Narcisse in the HBO series Boardwalk Empire, Beetee Latier in The Hunger Games films, Isaac Dixon in The Last Of Us Part II, and the Watcher in the Marvel Cinematic Universe (MCU) animated series What If… ? . Since 2016, Wright has starred as Bernard Lowe in the HBO series Westworld. W right will portray Commissioner James “Jim” Gordon in the superhero film The Batman (2022) by Matt Reeves. The signature is an original and authentic autograph given by the person listed above. The item comes with a COA (Certificate of Authenticity) from us (Matrix FRAMES). We are AFTAL Approved Dealer No. 81 and UACC Registered Dealer No. We are happy to answer any questions you may have. This item was obtained, in person, by us or on our behalf. We will package the item safely and use the appropriate service (listed below) to get your item to you as soon as possible. This item is in the category “Collectables\Autographs\Certified Original Autographs\Film”. The seller is “matrix-frames-autograph-store” and is located in this country: GB. This item can be shipped worldwide.